Looking for a Professional Construction Drilling Company Near Seattle, WA?

Pearson Drilling Inc. is a family owned and operated drilling & pile driving company. We have been proudly serving the Greater Seattle region and surrounding Washington communities since 1977.

Pearson Drilling Inc. began with a focus primarily in the geo-technical and environmental drilling industry. Since our founding in 1977, our services have changed and evolved with the growth of the company and the opportunities provided to us in the industry. Currently our primary services involve earth retention and Drilled or Driven Deep foundation work. Our experience and knowledge of the Pacific Northwest geology, as well as the Pacific Northwest environmental conditions, gives us the ability to handle projects of all scopes and difficulty levels.

Our primary goal is to successfully complete every project on time and on budget, let the quality of our work speak for itself, and approach every project with a TEAM mentality. Our drilling and pile-driving experts work closely with our clients to provide innovative solutions to each and every project – at a competitive price.

Our Office is located in Seattle by the Ballard Locks and Fisherman’s Terminal. We are a state and federally certified DBE/MBE contractor. Our certification number is: D1M0101949.

Terri Jamison, and future husband Terry Trew along with Terry’s father Dale (Pearson) Trew all worked for a Seattle Washington soil sampling company. They decided to buy an old beat-up Mobile B-S2 drill rig in Oregon. After they bought it, they were quickly unemployed.

“We bought this drill rig as a hobby, hoping eventually to bring it into the company we were working for,” T.J. Trew says. But the drill superintendent thought they were planning to compete with him so he let Terry and T.J. go. He called Trew, who was just finishing a job in Alaska, with the news.“He told me I’d have a lot of time to work on the rig when I came back,” Trew recalls.

When Trew got back from Alaska, he didn’t even check in with his former employer. He started getting the rig back into working condition. “It took a lot just to get it from Portland to Seattle,” T.J. explains. The Trews proved in this instance just how good they would become at facing tough situations successfully: They had a drill rig but no jobs, so they decided to go into business for themselves.

In 1977, T.J. founded Pearson Drilling Co., Edmonds, Washington, as a sole proprietorship. Dale Trew, who had worked for two large drilling companies since 1962, had always wanted to try his hand at a family business. So he quit his job as head driller for their former employer and became the drilling technician at Pearson. To get more experience and keep money flowing in, Terry Trew spent most of his time working through the drillers union on large construction drilling jobs. He worked at Pearson on coring jobs, his specialty, and as a driller’s helper when he had time.

Pearson started out drilling conventional split spoon soil sampling boreholes to test for soil stability. The company has since diversified to also drill augercast piles, bridge caissons, elevator jack shaft holes, retaining wall systems, side hill piling and tieback systems, geotechnical boreholes, environmental boreholes (including monitoring wells), and water wells. “We should have named ourselves versatile!” T.J.laughs. The common link in all this variety is that Pearson specializes in limited access and tough drilling sites; Trew says this specialty “came from doing them.”

Pearson is the perfect size for tough jobs. Its bigger competitors in commercial drilling make a profit on large volume jobs that Pearson can’t bid as competitively. “We look for jobs that are a little tougher to do. Everyone else is bidding a little high because they’re afraid of the job, so we bid a little lower so we can get the job. Then we work our way through it as efficiently as possible, so we have more chance of making a good profit on that job vs. simply doing volume. Instead of doing 10 jobs for $100, we’re doing 5 jobs for $1000,” Trew explains.

“If anybody could simply stand behind a drill rig and pull the levers and get the product completed, I would not be a driller today. One thing that has attracted me to drilling is that not just anybody can do it. And then within that same circle, the tougher the job is, the more intricate problems are on a project, the more exciting it is to be able to accomplish the end results,” he adds.

T.J. incorporated Pearson Drilling in 1988, with T.J. as president and Trew as vice president and driller (Dale Trew retired in 1987). Unlike some drillers who end up spending their time running a business, Trew gets to concentrate on drilling. “Signing contracts, going through contract negotiation, scheduling, the whole ramification of what it really takes to run a business is what T.J. does,” Trew explains. “She has to make the business work. All I have to do is 64 JULY ’94/WWJ show up and drill a hole.” T.J. ran the whole office herself until Terry’s brother Jim Trew joined the company a year ago as account coordinator.

T.J. and Terry got married in 1980. The same year, Terry and Dale built their second drill rig completely from scratch. The Pearson D-80 geotechnical rig is another example of how Pearson meets tough challenges with inventive solutions. The young company needed a newer drill rig to replace its old Mobile, but it couldn’t get financing. Dale had experience modifying rigs at his first company to drill through the glacial materials in the Northwest, and he felt they could build a rig themselves. So they did it. 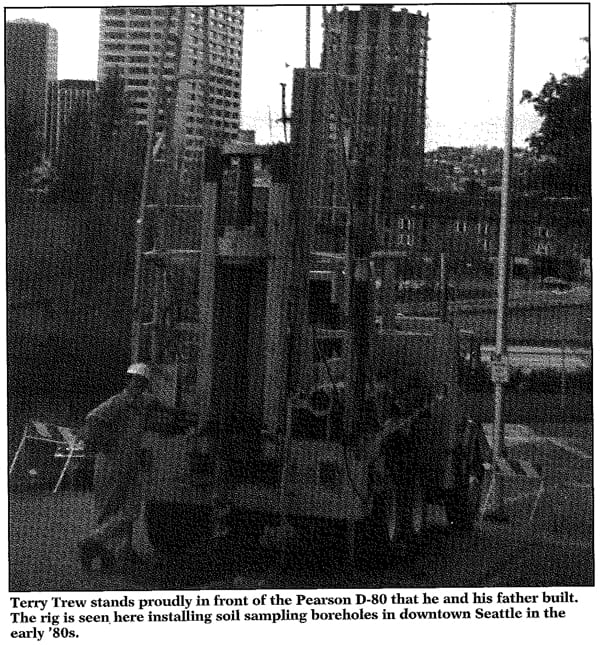 With a new rig, Pearson thought it was set in the soil sampling market. In 1981, however, soil . sampling opportunities dropped considerably. Pearson was one of the four major contenders left in the Seattle market, but its workload was still cut in half. To compensate, the company decided to diversify.

Pearson’s environmental driller, Jeff Jacobs, a licensed water well driller, joined the company in 1981. “He’s the one who did all the gas station monitoring wells with our Pearson D-80,” T.J. says. Trew, who is also licensed, mainly drills the commercial and soil sampling projects, but he has also drilled Pearson’s larger monitoring wells at landfill and sewer treatment sites with the company’s LDH 70 rig.

Pearson started ‘drilling water wells when the Washington State Department of Ecology initiated its water well ($200 per well) and monitoring well ($40 per well) fees and lumped water well drillers and environmental drillers together. Unlike some of Trew’s fellow board members at the Washington State Drilling & Ground Water Association, he and T.J. don’t necessarily disagree with the fees and other regulations.

”I’ve got plenty of tough holes ahead, but there’s no shame in drilling a small-diameter hole. You have to be able to enjoy what you do when you do it.”

If you have any questions regarding Pearson Drilling or the services we provide, we invite you to contact us today.

If you have any questions regarding our business or if you would like to discuss your project’s pile driving or drilling needs with an expert, contact Pearson Drilling today!